You are here: Home / Fires/Accidents/Disasters / Flood evacuation in Mason City on anniversary of devastating 2008 flood 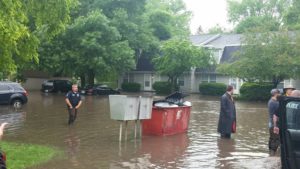 Areas of north-central Iowa had flash flooding this morning after up to five inches of rain fell across the region.

Cerro Gordo County Emergency Management Coordinator Steve O’Neil says they quickly closed several roads and evacuated an apartment complex in a flood-prone area on the southwest side of Mason City. “It started off as precautionary, but the water was rising pretty rapid so we wanted to stay ahead of it and get the people out before they were in any kind of danger,” O’Neil said.

The apartment complex, located along Chelsea Creek, was last evacuated by flash flooding in 2016. The are 24 units in the complex’s three buildings.

Today marks the 10-year anniversary of the start of heavy rains that led to flooding and millions of dollars in damage around Mason City and many other cities across northern and eastern Iowa.

According to O’Neil, emergency responders are much better prepared for weather disasters today than they were a decade ago. “This is a perfect example,” O’Neil said of today’s flash flooding. “We actually monitor the streams. We have gauges…and we know which areas to look out for and this is one where, to get ahead of everything, we made the move to get people out before we had to bring in boats and take them out that way, so 2008 was a great teaching tool.”

Mason City Firefighters did use boats today to rescue three people who didn’t get out of their building before it was surrounded by water.