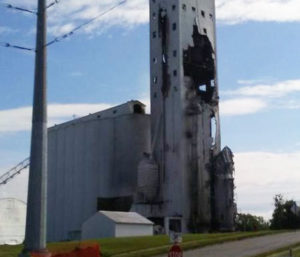 Two weeks after it was badly damaged in an explosion, the top half of the tower of the Anderson Farms grain elevator in South Sioux City, Nebraska, was pulled down Monday night.

South Sioux City Fire Chief Clint Merithew says the contractor brought in heavy equipment and yanked over the upper portion of the 23-story structure, where the blast had blown out an enormous hole.

“He had a lot of cuts he had to make and a little more structurally protected in some areas that he wasn’t familiar with on this elevator,” Chief Merithew says, “but once he brought the extra two excavators in with the needed horsepower, we got the call it would be five to ten minutes, it was down within two.”

While about 100 feet of tower is still standing, for now, the 26 displaced residents were allowed to return to their homes Monday night for the first time since the April 29th explosion. Merithew says the natural gas company is doing some vital work now. 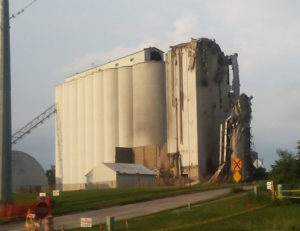 Most of the damaged elevator is now gone.

“They have necessary valving that they have to get to, now that it’s safe, then they can get back to the other two streets and get new valves put in there and then they can energize those homes with gas,” he says. The remainder of the tower will be taken down in the near future, but the large bins behind the tower are still filled with grain. It’s not clear if they’ll have to be demolished. While many of the street barricades are being removed, the area is still crowded with a host of first responders.

“All agencies still have a lot of work to do that are on-site, a lot of documentation and then we go into the demobilization mode,” Merithew says. “We should be cleared of our command post in three to four days.” Investigators have not released an official cause of the explosion, but the speculation is that grain dust sparked the blast.

Three employees were at the elevator at the time of the blast. One had minor injuries and another was badly hurt and was rushed to a Lincoln burn center with serious injuries. His name wasn’t released. No update on his condition is being given.