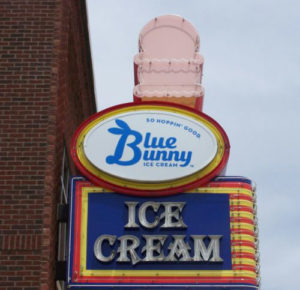 Wednesday’s kickoff to the Ice Cream Days celebration in Le Mars included an announcement by officials with Wells Enterprises about expansion plans for the town’s Blue Bunny Ice Cream parlor.

Wells Vice President of Retail Sales Adam Baumgartner says the parlor already attracts over 230,000 visitors a year. He expects the multi-million dollar renovation project will draw even more tourists to the town nicknamed “The Ice Cream Capital of the World.”

In addition to redesigning the parlor, Baumgartner says Wells has purchased a building next door to make room for an interactive “farm to spoon” display.

“We’ll be able to highlight how we get our milk, where it comes from, the processes it goes through to get into our facilities, how it gets processed in there, and how it gets turned into ice cream,” Baumgartner said. The added space will also feature rooftop seating.

Outdoor rooftop seating — so, a first-of-its-kind in downtown Le Mars. We are super excited about that,” Baumgartner said. The exact cost of the renovation project was not revealed at Wednesday’s announcement. The parlor will be closed in October and much of November, as well as between March 1st and mid-June of 2019. The project should be ready for next year’s Ice Cream Days, when the town of Le Mars will also celebrate its sesquicentennial.