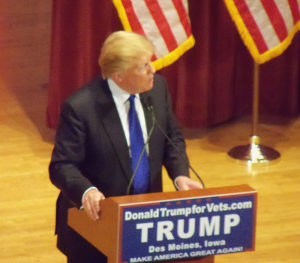 Trump speaking at at Drake during event in 2016.

New York’s attorney general has filed a lawsuit accusing the Donald J. Trump Foundation of illegal conduct — and the lawsuit mentions “at least five” checks distributed to Iowa groups before the 2016 Caucuses.

On January 28, 2016, Trump held a televised fundraiser for veterans charities at Drake University in Des Moines. It was Trump’s counter-programming to a Fox News debate for GOP presidential candidates that Trump skipped.

The money Trump raised that night went into the Trump Foundation account. According to the lawsuit, Trump’s campaign staff then improperly directed the money to veterans organizations.

A news release from the New York Attorney General’s office features a photo of Trump making a $100,000 donation to a veterans’ charity in Sioux City. Trump announced that donation the day before the Iowa Caucuses.

President Trump said on Twitter that the lawsuit is political motivated by “sleazy New York Democrats.”