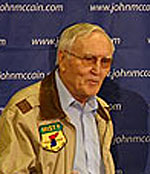 A Sioux City war hero who was among the most decorated military men in American history has been posthumously promoted by the United States Air Force.

Medal of Honor recipient George “Bud” Day was advanced from colonel to the rank of brigadier general during an event at the Air Force Memorial in Arlington, Virginia on June 8th. Day was an Air Force fighter pilot who was shot down in the Vietnam War and served in World War Two, Korea and Vietnam.

Captain Jeremy McClure of Sioux City’s 185th Air National Guard says Day has long been an important figure to those who serve in his hometown.”I know he’s an inspiration to a lot of us — especially as we learn about Air Force history and how much of a role he plays,” McClure says.

McClure is currently attending training at Maxwell Air Force Base and says there is evidence there of how well respected Day was outside of his home state. “When you go to bases like Maxwell Air Force in Alabama and see how large of a figure that now General Day is to the entire Air Force and all the 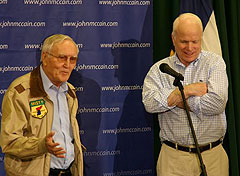 monuments and plaques to him down here, it helps you realized that he is more than just a big deal to Sioux City. He’s a legend in the Air Force as well,” McClure says.

Day died in 2013 at the age of 88. He enlisted in the Marines during World War Two. While flying a mission over North Vietnam in 1967, Day was shot down and captured by the North Vietnamese. Day suffered a dislocated knee and broke his arm in three places, but managed to escape captivity and evade the enemy for two weeks, the only prisoner to actually escape from North Vietnam. Day was just two miles from a U.S. Marine Corps base when he was shot and recaptured by a Viet Cong patrol.

He endured a brutal, 67-month imprisonment that finally ended in repatriation in March of 1973 when he was reunited with his wife and four children at March Air Force Base in California.

McClure says most people know about Day’s actions while a prisoner of war, but probably don’t know he also lead one of the most dangerous missions of the Vietnam war when he took control of the forward air controllers flying in the F-100’s. He says there are “so many reasons why General Day is a legend.” The landing area at Sioux Gateway Airport is named “Bud Day Field” in his honor.

The posthumous advancement of Day to general was introduced by Senator John McCain, a fellow POW with Day in North Vietnam at the infamous “Hanoi Hilton.” Day’s widow Doris attended a concert at the Air Force Memorial in Arlington, Virginia, last Friday where her husband’s promotion was formally noted.