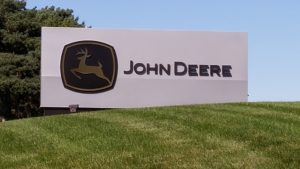 John Deere is celebrating a century of tractor production in the northeast Iowa city where it all began in 1918.

The company is hosting a two-day community celebration in downtown Waterloo today and tomorrow that features everything from vintage tractors and engines, to kids games, and live music. Kelly Henderson is John Deere’s project manager and event co-organizer.

“This is really a celebration to thank our community, our customers, our fans, and all of our employees for the past 100 years that we’ve had here in the Cedar Valley,” Henderson said. Three venues and about four blocks of city streets are being used for the century celebration. More than 111 vintage tractors and engines will be on display.

“We have collectors who are bringing in tractors from all over, as well as our archive tractors that have come out of storage for this show,” Henderson said. “I’m told that there are a lot of collections that have never been seen together before, taking place here in Waterloo.” The two-day celebration will include a display so large that, according to Henderson, specific details have been kept secret from corporate executives. That display is located inside the exhibit hall at the Waterloo Convention Center.

“We have set up our entire 100 years of John Deere history through eight eras, breaking it out,” Henderson said. “These will be large cylinders suspended from the ceiling that walks you through not only John Deere’s history, but what was happening in the community, and the world at the time.” The museum will have a blacksmith and other demonstrations, along with some children’s activities and a photo booth. Henderson said, while this is a celebration of 100 years of tractors, it’s also a recognition of the company’s partnership with the Cedar Valley.

“We have over 5,000 employees and thousands of retirees in the area. We all live, work, volunteer, and contribute to the communities,” Henderson said. The century celebration runs from 3 p.m. to 8 p.m. today (Friday) and 10 a.m. to 8 p.m. on Saturday, concluding with a free concert by Joe Diffie at 6 p.m. Diffie is best known for his 1993 song “John Deere Green,” which peaked at #5 on the country music charts. The celebration marks John Deere’s acquisition of the Waterloo Gasoline Engine Company in 1918, a purchase that thrust the then 80-year-old farm implement maker into the tractor manufacturing business.