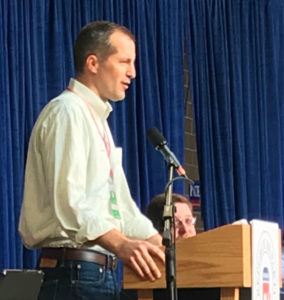 The one statewide contest that was unresolved by the June 6th Primary ended today. Delegates at the Iowa Republican Party’s state convention nominated Mike Naig as their candidate for Iowa secretary of agriculture.

“Now, if I’m elected secretary I will make this promise to you: I will continue to work with all of my effort to build a brighter future. I will bring a conservative voice, common sense and leadership to the department on your behalf every day,” Naig said during a three-minute speech to delegates early this afternoon.

Naig was the top deputy in the agency until March. Ag Secretary Bill Northey left for a job in Washington and the governor appointed Naig to take Northey’s place. Naig fell just short of the 35 percent support he needed to win the GOP’s nomination from the primary results. Congressman Steve King signaled to delegates that Naig had the backing of the party establishment and King reminded delegates Naig got more votes than his competitors in the primary.

“He’s Bill Northey choice. He was appointed by Governor Reynolds,” said King, who faced a similar nominating process during his first run for congress in 2002. “He has their support, my support, but more importantly, he won the election and he is the choice of ‘We, the People.'”

Three of Naig’s competitors called on the GOP to nominate an active farmer rather than an administrator like Naig. After three rounds of voting, the contest was down to Naig and Ray Gaesser of Corning.

“I’m a full-time, life-long farmer with my hands in the soil,” Gaesser said in his three-minute speech to delegates.

On the final ballot, Gaesser got nearly 46 percent of the delegates’ votes compared to Naig, who got a total of 54 percent — the only round Naig crossed the required 50 percent threshold to secure the nomination from GOP delegates.

“Now the job is before us. We know what we need to do,” Naig said. “It’ll be a competitive race looking ahead to November.”

Naig will face Democrat Tim Gannon, a former aide to Tom Vilsack in the governor’s office and in the U.S. Department of Agriculture. Gannon, who did not face primary opposition on June 6, addressing delegates at his party’s state convention today.

“The hay is not in the barn yet, so we have to do all we can over the next five months,” Gannon said.