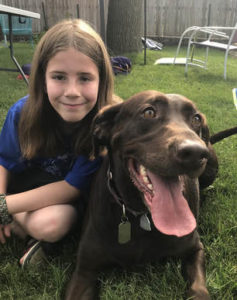 A northeast Iowa boy has amassed a tremendous, international following on Twitter thanks to his simple love for dogs.

Nine-year-old Gideon Kidd of Cedar Falls has a website that features photos of himself petting a variety of canines at www.ivepetthatdog.com. It all started when he created a blog when he was seven, with the help of his mom.

“I just thought of it and I love dogs and I wanted to show the world these amazing creatures,” Kidd says.

At the suggestion of his mom, Kidd started posting pictures of the dogs he met on Twitter instead of just the website, and now, @IvePetThatDog has more than 90,000 followers.

Each photo is accompanied by a few sentences about the dogs, just basic questions he’ll ask the owner or caretaker.

“For starters, can I pet your dog and what’s his name?” Kidd says. “Then, I ask about the dog, like, where did you get the dog, how old is your dog, what type of breed, your dog’s personality, any funny stories? Does he like playing? Any favorite toys?”

Besides dogs in his neighborhood, Kidd meets new dogs at places like the farmers market or the Cedar Bend Humane Society. He and his mom go out nearly every day to “get” a dog.

Rachel Braunigan says her son is “extremely social” and she thought it would be a good way for him to meet people.

“He said he wanted to take pictures of all the dogs he met and I was confused at first,” Braunigan says. “Then, he said he wanted to put them up for people to see and I said, ‘Like a website?’ and he said, ‘Yeah!’ So, we decided to try it and I didn’t think it would last this long.”

After being featured on “The Today Show,” Kidd’s number of followers on Twitter bounded from the hundreds into the tens of thousands. Why is it so popular?

“I think it’s just the simplicity of it,” Braunigan says. “It’s a boy, a dog and a short story. It’s not an opinion. It’s nothing polarizing. It’s just the simplicity and people love dogs.” Braunigan says she monitors her son’s online activities. “Everything he posts I’m there to make sure it’s okay, so he doesn’t see things I don’t want him to see and I monitor who he follows,” she says. “It’s such a surreal experience.”

The two made their comments on the Iowa Public Radio program “Talk of Iowa.”