You are here: Home / Crime / Courts / ‘March for Our Lives’ tour stops in Sioux City 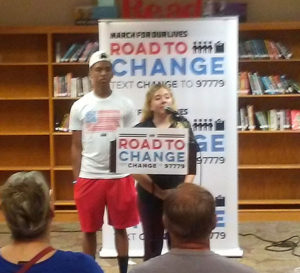 A student from Marjorie Stoneman High School in Parkland, Florida Jaclyn Corin was the keynote speaker.

Seventeen people were killed during a February shooting at the high school and Corin talked about her advocacy to stop gun violence in the wake of the killings of her fellow students and teachers.

“I personally organized a protest to our state capital of Tallahassee less than a week after the shooting. And we amazingly did not stop advocating from the start — and here we are four months out and we are still not stopping,” Corin says. Corin says her group wants what she calls “morally just leaders” elected to political office.

“Lobby groups like the National Rifle Association have such a stranglehold over our politicians and they bar these politicians from passing common sense gun laws to protect their own constituents — which is completely unAmerican,” Corin says.

Corin and a student from Chicago talked to a predominantly Democratic audience of 100 people that included King’s opponent for Congress, J.D. Scholten and numerous local party leaders and supporters. Corin’s group then met with local high school students to discuss how to get young people out to vote. They also made posters for a planned afternoon protest outside of Congressman Steve King’s Sioux City office.

She says they will hold a vigil at King’s office to honor all the lives that have been lost to gun violence. “because Steve King is not a morally just leader.”

King is in Washington, D.C. and not at his Sioux City office. The Congressman declined to respond to Corin’s remarks or the protest at his office.