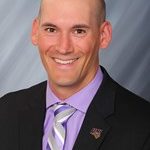 Northern Iowa cross country and track and field coach Dave Paulsen has been awarded a contract extension through the 2022 season. The extension comes on the heels of a conference championship in the outdoor season for the men’s track and field program. It is the second Missouri Valley Conference title since Paulsen took over as head coach for the 2015-16 season.

In his second year as the head coach of the cross country teams, Paulsen earned MVC Coach of the Year after the women’s team exceeded its No. 6 preseason ranking to capture the conference title. Four Panthers placed in the top 10. The women placed ninth at the NCAA Midwest Regional, the team’s highest finish in UNI history. Paulsen just wrapped up his third year as the leader of the Panther cross country and track and field programs and was named USTFCCCA’s Midwest Coach of the Year. Paulsen will enter his 11th year with UNI having served as an assistant coach at his alma mater.