You are here: Home / Crime / Courts / Iowa native touring state to promote her book ‘Homeless to the White House’ 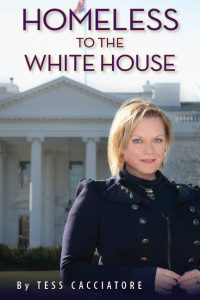 An Iowa native’s newly-released book is at number 15 on Amazon’s list of “faith-based” book sales.

Tess Cacciatore lives in Los Angeles, but she’s back in her hometown of Des Moines this week to kick-off a tour promoting her memoir. It’s titled “Homeless to the White House.”

“It was written about my journey, through life, through six continents, to find the meaning of life for me and to find a place where I could reveal my shadow side and the atrocities and relationships that I had to recover from so that I could heal,” she said.

Cacciatore writes about being the victim of domestic abuse to singing on the White House lawn during the International Day of Prayer. She also using the book to promote her #Reveal2Heal campaign. Cacciatore says it connects with the #MeToo and #TimesUp campaigns.

“Every person has had that time in their life where they’ve had that dangled carrot in front of them and how we’ve been able to go past that dangled carrot and really be self-aware and have self-love,” Cacciatore says. “And the journey started for me a long time ago, but yet I know every day is a journey.” Cacciatore, who is 57 years old, is the co-founder and CEO of a group called “GWEN” which stands for the Global Women’s Empowerment Network. Cacciatore will be on the Iowa State Fairgrounds Saturday afternoon for the CultureALL event that’s part of ArtFest Midwest. She’s also signing copies of her memoir at Beaverdale Books in Des Moines Saturday morning.