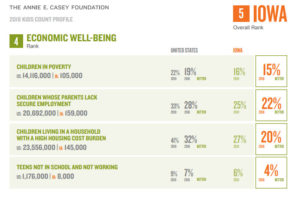 Iowa held its place at fifth in an annual Kids Count report which ranks each of the states on how well they do in taking care of kids.

Iowa Kids Count Director, Michael Crawford, says the state has ranked anywhere from third to fifth in the last five years — and this year holds that trend. “We’ve had some good things and some bad things,” Crawford says, “really overall it’s a good report for Iowa.” The report uses 16 measures to rank the states against each other.

Crawford says there are a lot of differences between states and it is tough to get a true picture of how they match up against each other. He says it is important to look at the data from Iowa and compare it to the past and he says there are positives when you look at the numbers. “The teen birth rate has decreased 41 percent since 2010– so that is a good sign. In addition we’ve had decreases in the number of children without health insurance coverage. We are down to three percent of all of our children are uninsured right now. And then also, high school students not graduating on time is down to nine percent,” according to Crawford.

Iowa ranks fourth in the report nationwide in the economic well-being category. But Crawford says there are areas there where there could be improvement. “The bad news is, just a couple of areas, is our child poverty rate has somewhat stagnated the last few years,” Crawford says. “It has decreased a little from 2010, but since 2014 it has stayed relatively stable or stagnated about 15 percent.” He says the poverty numbers are higher for children of color in the state. Another area where he seeds a need for improvement is the number of kids living with just one parent.

“Right now that’s about 30 percent of all of our kids in Iowa live in single parent families,” he explains. “We are lower than the national average in that indicator — but still it’s higher than we’d like to be.” Crawford says He says there are a couple of things that could be done to improve the economic well-being of kids. One is an increase in the minimum wage.

“We feel it should be increased to about 10 dollars per hour. I think it would help families cover the cost of raising and supporting their kids….so that’s one area where we could help families financially,” Crawford says. “Another area I think is on the income tax return, on the Iowa income tax return. I think increasing the child tax credit from 40 dollars to 100 dollars per child I think would help families quite a bit also.” Crawford works at the Child and Family Policy Center and says the state does a good job when you look at the history and progress Iowa is making.

“It is a good place to live and a good place to raise kids and I think overall we do well,” Crawford says. “And as I mentioned, rankings compared to other states, it’s good to look at that it makes us feel good — but we think it is also very important to look at Iowa compared to Iowa. Where we are now compared to where we were five to ten years ago.”

You can see the full results of the Kids Count survey at www.cfpciowa.org.