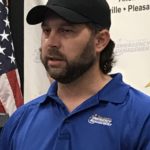 Officials in central Iowa say it’s too soon to estimate damage from this weekend’s flash flooding or say for sure how many homes and businesses were damaged or destroyed.

“Obviously a historic event in terms of sheer rainfall,” Munn said during a midday news conference on Sunday. “Fires, explosions, rescues of all types occured.”

The National Weather Service issued a rare “Emergency Flash Flood” alert to cell phones in Polk County Saturday. Kelsey Angle, the warning coordination meteorologist at the National Weather Service office in Johnston, said the “catastrophic flooding” was caused by between three and eight inches of rain falling in central and northern Polk County in a short amount of time.

“The good news is the heavy rain threat has ended across central Iowa,” Angle said. “We’ll continue to see waters slowly recede as we head…on into next week, so as response and recovery efforts continue, dry weather is expected.”

A few temporary shelters were set up Saturday evening. Polk County Supervisor Angela Connolly said they aim to have a “one-stop-shop” established by early Monday afternoon to help flood victims with housing assistance as well as any physical and mental health needs.

“We have a lot of people who have been displaced from their homes,” Connolly said, “…throughout the community, whether it’s Urbandale, West Des Moines, Clive or folks at the fairgrounds.”

Des Moines Mayor Frank Cownie said flood prevention and preparation measures that were undertaken after previous floods in 1993, 2008 and 2010 have helped, but this was record flooding.

“It’s a little scary,” Cownie said. “…Those high water marks on the east side and the west side of our metro area were exceeded…in one downpour.”

Police and fire department officials say it’s difficult to say how many people had to be rescued from rising flood waters in their homes and vehicles. A well-known radio personality died after his van stalled in the flash flooding. Sixty-six-year-old Larry Cotlar was the voice of the Drake men’s basketball team.