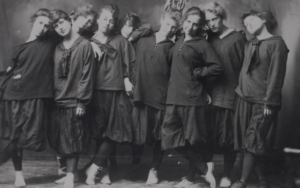 An exhibit showcasing the history of 6-on-6 girls basketball in Iowa is in the midst of a six-city tour across the state. It was 25 years ago this year that Iowa’s final 6-on-6 state tournament was held.

University of Iowa professor Susan Birrell is co-curator of the exhibit, which was first put on display in Mount Vernon in March. “At Mount Vernon, we were met at the door before the exhibit even opened on the first day by women who were eager to see the exhibit and share their own stories,” Birrell said. The exhibit was moved to Ottumwa in May and is now on display in Guthrie Center through August 5.

Julie Goodrich-Blake donated photos and other items to the exhibit. She played for Adel in the 1970s when her team made it to the finals of the state tournament two years in a row, losing both of those games. During her junior and senior years, Goodrich-Blake received fan mail from around the state and was a superstar in her small town in Dallas County. “We were treated like royalty, really,” Goodrich-Blake recalled. “We had so much success and the people of the community enjoyed watching us.”

Current University of Iowa women’s basketball coach Lisa Bluder played 6-on-6 hoops for Linn-Mar in the late 1970s. Her teams never made it to the state tournament, but Bluder has fond memories of the pageantry put on display at Vet’s Auditorium in Des Moines.

“Every year, we’d go and watch the state tournament and see all the glamour – and it was packed,” Bluder said. “The guys would come out in their tuxedos and clean the floor at halftime. The spotlights would come on and they’d announce the all-tournament teams and the people being inducted into the hall-of-fame. The whole thing was marvelous.”

Although the 6-on-6 game wasn’t unique to Iowa, support of the sport was extraordinary – both in terms of fans and organization. Iowa has the longest running state tournament dedicated to high school girls, with the first unsanctioned tournament held in 1920. 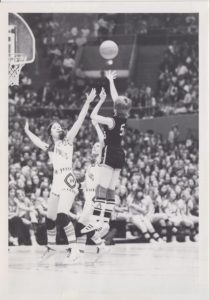 Goodrich-Blake, who went on to play at Iowa State University, said she feels lucky that she grew up where she did. “My mother and grandmother played basketball, my aunts played, so I didn’t realize other girls my age weren’t getting to play across the country. It wasn’t novel to go out for basketball at Adel because everybody else had played before,” Goodrich-Blake said.

Iowa was one of the last two states to play 6-on-6 basketball (Oklahoma held its last 6-on-6 tournament in 1995). Each team in the 6-on-6 game had three guards on one side of the court and three forwards on the other.

Shelly Lucas was a guard for the New London Tigerettes in the early 1980s. “I didn’t know it was unusual that I never got to score any points. I took a lot of pride in my defensive skills,” Lucas said. “My school was never a noteworthy school, we didn’t make it to state or anything like that. We were playing because it was fun to play and that’s what you did when you grew up in Iowa.”

Lucas, now a professor at Boise State University, earned a PhD at the University of Iowa in 2001. Her dissertation examined the controversy over switching Iowa high school girls’ basketball from a six-player to a five-player game.

The traveling exhibit, currently in Guthrie Center, will make three more tour stops between August and the end of the year in Jefferson, Ames, and Conrad.