You are here: Home / News / Unique okapi takes up residence at the Blank Park Zoo 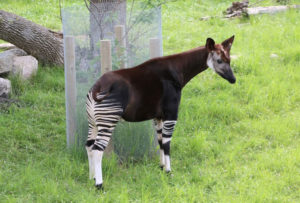 Iowa’s largest zoo is welcoming an exceptionally rare creature, one most Iowans have never heard of or seen.

It’s a 650-pound okapi named Kimodo from the Democratic Republic of the Congo in Africa. Ryan Bickel, spokesman for the Blank Park Zoo in Des Moines, describes the unusual animal, which is an endangered cud-chewing mammal.

“They’re very unique. They have a longer neck than what you’d normally think of with a horse or any sort of antelope, but shorter than a giraffe,” Bickel says. “They’re the only living relative of a giraffe and they have the hind quarters and legs that look like zebras.” There are only perhaps 30,000 okapi left on the planet. Bickel says they’re vanishing because of the high demand for a type of metallic ore that’s used in cell phones and other electronics.

“One of the only places on the earth that it’s found is the Congo,” Bickel says. “We are setting up a way that you can recycle your cell phone to reduce the need for the mining of that metallic ore.” Okapi are used to the hot African climate and it’ll do fine in Iowa this summer, but once the weather turns colder, Kimodo will be housed in a special heated barn. So what does the 12-year-old okapi eat?

“We have very specific dietary requirements that a veterinarian comes up with,” Bickel says. “We feed it hay and they get a specific grain that is often just developed for that species. We think of it as Puppy Chow for okapi.” The zoo is also home to a rare species of African antelope called addax. Two new addax were born at the zoo in May and June, which Bickel says is very important.

“There’s almost zero addax in the wild,” Bickel says, “so almost all of the addax that are left on the planet earth are in the care of humans at this point.” The zoo is also welcoming several more baby animals, hatched or born in recent weeks, including two Magellanic penguins and a skink.