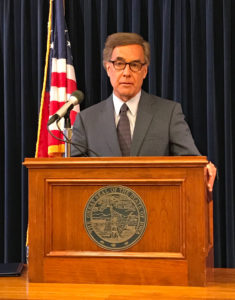 A motorcade is planned through Des Moines Thursday afternoon to bear the late Governor Robert Ray past some of the sites that were important in his life.

Des Moines Police and Iowa State Troopers will lead the hearse carrying Ray past the governor’s mansion the Rays helped restore, past Roosevelt High School and Drake University where the Rays graduated, past Des Moines City Hall where Ray served as interim mayor and, finally, to the capitol where Ray served 14 years as governor.

“Mostly this is to allow the Ray’s eight grandchildren to see some of the touch points of their lives, where they went to school, go by First Christian Church where the service will be on Friday,” David Oman, who served as Governor Ray’s chief of staff, told reporters this morning.

Ray’s funeral on Friday afternoon will be in the church where the governor and his wife, Billie, first met. 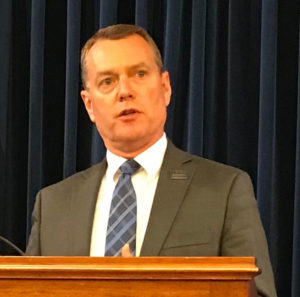 Scott Raecker, head of the Ray Center at Drake University, said that meeting happened at church camp. “One year they were both king and queen of the church camp,” Raecker says. “…It’s been a pinnacle of their lives. Their family lives have been in that church. ”

Bob and Billie Ray were married there in late 1951 and their three daughters were baptized at the church where the governor’s funeral will be held Friday. The service will start at one o’clock and it will be livestreamed by Drake University. Ken Quinn, another former Ray staffer, Oman and Raecker will be delivering eulogies.

“Our best efforts will be to acknowledge Governor Ray’s wishes and have it be an hour or less,” Raecker said.

Governor Ray will lie in state at the capitol on Thursday evening. Oman said there will be five kiosks in the rotunda where people may leave personal messages.

“We’re actually encouraging Iowans to come here on Thursday where there’s more access, more flexibility, more opportunity to move around and the only opportunity to pay their individual respects by filing by his casket,” Oman said.

The capitol’s south entrance will be open to the public Thursday. Visitors must pass through a security checkpoint and Oman is encouraging people planning to come to arrive early. The public will be able to pass by the governor’s casket from 5:30 until 8:30 p.m. Thursday. Ray will be the tenth Iowan to lie in state at the capitol and the first since 1954.