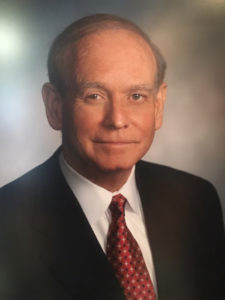 Former Governor Robert Ray’s family has designated the Ray Center at Drake University for those who wish to make a memorial gift in honor of the five-term governor. Scott Raecker, the center’s director, is inviting Iowans with stories to tell about Governor Ray to visit the center’s website.

“The Robert D. and Billie Ray archives are housed at Drake University, not only will the gubernatorial papers that are going over there on loan to be transcribed and digitized, but all their personal records and papers,” Raecker says. “So if Iowans want to leave a memory or reflection of Governor Ray, those will all be captured at the Ray Center.”

The organization sponsors programs that promote civility and leadership development, “that were not only important to Governor Ray as advocacy, but certainly how he and Mrs. Ray have lived and she will continue to live her life,” Raecker says.

The organization originally was called “Character Counts in Iowa.” It was founded in 1997 by Governor Ray as part of the state’s sesquicentennial celebration. It was renamed the Ray Center in 2014.

Governor Ray grew up in the Drake neighborhood and both Bob and Billie Ray are Drake graduates.

(Photo courtesy of the Ray Center)