You are here: Home / News / Boulton announces he plans to stay in state senate 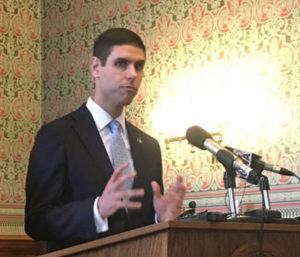 Fifty-three days after exiting the race for governor amid allegations of sexual harassment, Democrat Nate Boulton has announced he intends to remain in the state senate.

In late May, The Des Moines Register published the accounts of three women who said Boulton had groped or rubbed them inappropriately. Boulton dropped out of the gubernatorial race the next day.

Late Monday afternoon, Boulton issued a written statement on Twitter. He admitted to binge drinking, suggested it was a contributing factor to those incidents  and Boulton said he hasn’t had “a single drink” since November.

Boulton said he “cannot apologize enough for the heartache” his past actions caused, but Boulton concluded his written statement by saying he plans to return to the statehouse in January when the senate reconvenes.

Seven weeks ago, Senate Democratic Leader Janet Petersen had called on Boulton to resign. Petersen, in a written statement issued early Wednesday evening, said Boulton’s decision to stay “is disappointing.” Petersen said Boulton will have to answer to voters in his senate district and “to a possible independent investigation.”

Republicans control the committee structure in the Iowa Senate, so GOP senators would have to launch an investigation.

Boulton was first elected to the state senate in 2016. He has about two and a half years left in his four-year term.