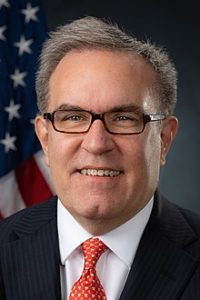 Members of the Iowa Congressional delegation are inviting the new head of the U.S. Environmental Protection Agency to visit Iowa.

“We’d like him to visit to learn more about how the Renewable Fuel Standard works, how it impacts farmers and also the workers at the refineries where ethanol is made,” Grassley says, “that it’s a cleaner burning fuel that makes us more energy independent.”

During his confirmation hearing, Wheeler pledged to fully support the RFS program and recognized it as “the law of the land.”

The previous EPA director Scott Pruitt resigned earlier this month after being blamed for undermining ethanol and the RFS.

“Pruitt did considerable harm to the trust of farmers for this administration,” Grassley says. “It’s impossible to explain to farmers why the EPA did a de facto 10% cut in the Renewable Fuel Standard at the same time grain prices are going down rapidly.”

Grassley says corn prices have dropped below three-dollars a bushel at his home elevator in New Hartford. He says he’s “optimistic” Wheeler will work with Iowans to “maintain the integrity” of the RFS.