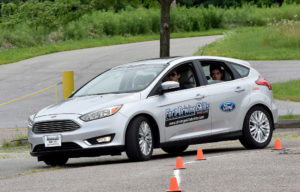 A free half-day hands-on course which aims to teach newly-licensed drivers important skills behind the wheel is being offered next week in central Iowa.

Jim Graham, manager of the Ford Driving Skills for Life program, says the workshop is designed for teenagers who have learner’s permits or full driver’s licenses — and their parents.

“We’ll put teens and their parents with professional driving instructors and teach them additional skills they haven’t learned in driver’s education,” Graham says. “We’ll focus on things like vehicle handling, what happens if the car gets loose in the snow and ice, recognizing hazards and making the proper decisions, and we’ll get into things they shouldn’t be doing, like distracted driving.”

The classes zero in on key areas of driving that are critical factors in more than 60% of all crashes.

“The real issue with newly-licensed drivers is the lack of experience,” Graham says. “I feel, over the 15 years I’ve been doing this, I’ve seen a lot of improvement with teens as it relates to distracted driving. They’re getting a lot smarter with the cell phones. They’re realizing they need to put these things down. I’ll be candid. I think adult drivers, including people I know — and everybody’s guilty of it — do a lot more on the hand-held phones.”

One comprehensive section of the workshop is on distracted and impaired driving. Contrary to popular belief, Graham says teen drivers are -not- typically the worst offenders for texting while driving.

The free courses run about four hours and will be offered both in the mornings and afternoons next Wednesday and Thursday, July 25th and 26th, just northwest of Des Moines at Adesa Auto Auction in Grimes. Vehicles are provided for the training.