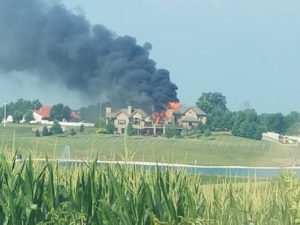 A massive home, valued at $1.8 million dollars, was destroyed by fire Sunday in south-central Iowa.

There are no fire hydrants in the area, so tanks of water were hauled in and firefighters pumped water from nearby ponds. The fire may’ve started in the attic of home.

“They did their best to knock it down from the exterior, but it did result in the total loss of the house,” Vetterick said. The 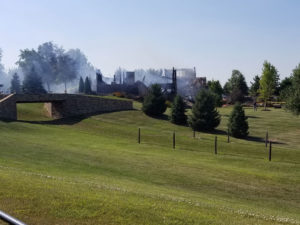 cause of the fire remains under investigation. No one was injured. One person was in the home when the fire started.

“It was reported to me that he was awoke by heat. He woke up because it was hot and about that time, he heard crackling above his head,” Vetterick said. “It is our belief, if he was sleeping and it was hot in his room, the fire was definitely well underway above the ceiling before 911 was called.”

According to information on the Warren County Assessor’s website, the home is owned by Britt Baker, the CEO of Baker Electric.