You are here: Home / News / Husband, mother-in-law testify about night Shannon Bogh was stabbed to death in Le Mars 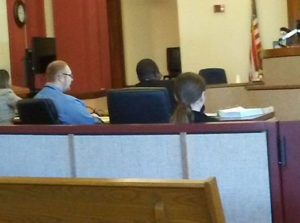 Testimony began this morning in the trial of a Le Mars man accused of stabbing his sister to death two years ago.

Thirty-five-year-old Thomas Bibler is charged with first-degree murder in the death of 27-year-old Shannon Bogh at her home in Le Mars. Philip Bogh, the victim’s husband, testified his wife and two-year-old child went outside to water flowers on the evening of June 16th, 2016 and when he joined them outside, he saw Shannon’s brother talking with them.

“I passed them. I was probably 10-12 feet away and Shannon started screaming,” Hogh said.

The prosecutor asked Bogh if he remembered the words his wife was saying.

Philip Bogh then testified that Bibler moved away from Shannon and headed for his truck.

“It appeared to me he was folding a knife in his hands,” Bogh said. “…I turned back and looked at Shannon. She moved her hands away from her chest and I could see she had a hole in her chest and was bleeding.”

Philip and Shannon Bogh had been out to dinner before the 8 p.m. incident at their home. Lisa Bogh, Philip’s mother, had been baby-sitting the couple’s two youngest children and was still inside the home when she heard gasping and screaming outside, then Shannon ran back into the house.

Lisa Bogh testified that her daughter-in-law told her she was afraid.

Sergeant Rick Singer with the Plymouth County Sheriff’s Department testified that Shannon Bogh was not responsive when he arrived at the scene. Bogh was taken to Floyd Valley Hospital where she died a short time later. Her brother was arrested at his Le Mars apartment that evening. He has pleaded not guilty to first degree murder, which carried a mandatory life prison sentence if he’s convicted.