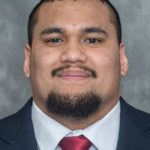 Lima won the Dury Moss Award in 2017 as Iowa State’s top newcomer after an outstanding first season with the Cyclones.