The Iowa Lottery scratched out a record in sales for the fiscal year that ended June 30th.

Lottery spokesperson Mary Neubauer says total sales were $371 million — and the $87.1 million that’ll go to the state is the second highest amount every produced. Neubauer says the first product ever sold by the Iowa Lottery continues to be the steady driver in sales.

“Scratch ticket sales have done well in Iowa for the last several years and this last year they again set a record, and that then propelled the lottery to the really strong results that we had,” Neubauer says. It is the fourth straight year scratch tickets have set a record for sales and their sales have increased by 89% from 2007 to 2017. Big jackpots in lotto games can give the Iowa Lottery’s bottom line a boost — but those are unpredictable — while the scratch tickets continue to be a steady source of income.

“They have a smaller profit percentage overall than does a game like Powerball or Mega Millions. So, the overall profit percentage may be a little smaller when scratch tickets lead the way,” Neubauer says, “but again you’re going to be talking about bigger sales in total. So, it was just a lot of positives for us. And then the other number I haven’t mentioned, is that with record sales comes record prizes to players.” The Iowa Lottery paid out nearly $228 million in prizes in the fiscal year. 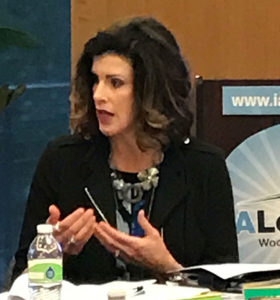 “One of the games that we had on the market this last year was a Frogger game and that really hit the nostalgia mark with our players and Frogger was one of our best selling games for the year,” according to Neubauer. “So we put a lot of thought into it, and I’m really happy to see that reflected in the numbers.”

Another boost for scratch ticket sales came with a stable gas prices.

“In the past when gas prices have really spiked, we see almost an immediate impact on lottery sales,” Neubauer explains. “And over the last year gas prices have been fairly stable — or they have even trended down some.” Scratch tickets are sold at dozens of convenience stores across the state, and Neubauer says lower gas prices seem to free up a little extra cash after people fill up.

“I think the consumer really feels that at the gas pump. They have a few extra dollars in their pocket and they can do things like buy a sandwich or buy a soda or buy a lottery ticket. So, we think that was part of the picture this past year as well,” Neubauer says. Total sales exceeded 300 million dollars for the seventh year in a row. It is the fifth time the proceeds to the state have exceeded $80 million in the Iowa Lottery’s 33-year history.

The largest prize won in Iowa was a $4.38 million dollar Lotto America jackpot. Four other Iowa tickets won prizes of one million dollars during the year, including a Powerball ticket purchased in Nevada for the April 11th drawing that remains unclaimed.