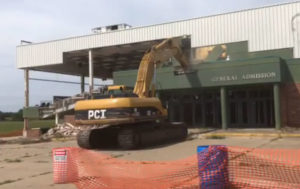 Work got underway today to tear down the abandoned greyhound track that has been an eyesore on the south side of Waterloo along Highway 20 for more than three decades.

Waterloo Mayor Quentin Hart grabbed a sledgehammer and took the first symbolic hit on the dilapidated structure. “And I swung so hard I probably took about two years off my life,” Quentin says with a laugh, ” but it was great. And right after I did the sledgehammer, they started with the backhoe to start tearing it down.”

The Waterloo Greyhound Park opened in 1986, but after a few years of operation fell victim to the competition of casino operations and shut down in 1993. Legal disputes kept the track from every operating again and through the years it was vandalized and became rundown.

Mayor Hart says getting rid of the old track was one of the top questions he got during his campaign — and he is glad it is finally happening. “The fact that that sits right near the intersections of Highway 20 and 218 — to have that be what people see the first thing about our community is not great. And just to see all the change and growth has been tremendous,” Hart says.

Trees grown up around the track.

The Meskwaki Nation lent money to the National Cattle Congress to try and bail them out of bankruptcy and eventually foreclosed on the property in 1996. Which kept the property tied up in legal issues. Local developer Harold Yungblunt eventually work through all the past issues and reached a deal to buy the property and redevelop it.

“And probably the best thing for it is we didn’t get in it, the city, they were able to work it out and come up with I guess a win-win scenario for all parties involved,” Hart says. Hart says the redevelopment of the Greyhound Park land continues the work that has already been done in the area.

“On the north side of (Highway) 63 near the Logan Plaza area, we’ve been able to see the resurrection of a new medical center, and the city has land that will be available for new development opportunities,” according to Hart. “So, seeing that whole 63 corridor and TechWorks and the new buildings — man there is a new vein going through Waterloo that is showing tremendous potential.”

Hart says the demolition of the track buildings is expected to take around ten days and there should be new commercial development built in the area within the next year.

Here’s a video of the track before demolitions started: