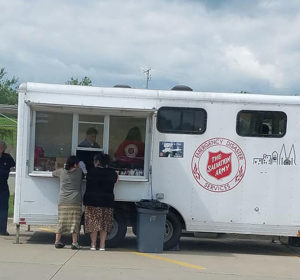 The Marshalltown Salvation Army serving meals at its canteens following the tornado.

One of the key organizations that helps those impacted by natural disasters was itself a victim when the massive tornado struck downtown Marshalltown last week. Salvation Army Captain Pam Kasten says their building was right in the path of the tornado.

“We have a large community center there with a gymnasium and classrooms, a kitchen and offices and it took off the roof and the staff say it shook the building — I was at one of our other buildings — and it sustained quite a bit of damage,” Kasten says.

The damage made them have to do some extra preparation before heading out to help the community. “It’s been a challenge, we would usually have area command in our building and operate out of it to get the canteens out on the road to the public, and we haven’t been able to do that,” Kasten says. She says they moved the command operations to a car and Hy-Vee allowed them to set up the canteens in their parking lot.

“For first day-and-a-half we served from that parking lot from our canteens and provided clean up kids and just some spiritual care to the community,” Kasten says. “And then on Saturday afternoon we rocked-and-rolled and got out of there and got onto the streets and went to the people so that they didn’t have to come to us any more.”

On a personal level Kasten had to adjust too. She describes herself as very organized and having to work out of a car instead of the main office took more adjustment. And on top of that, she had only been in Marshalltown for a little more than two weeks after transferring from Boone. “It’s been a little overwhelming to say the least. But I have a really good team,” according to Kasten. “The Salvation Army is in 130 countries, and so you know we help each other out. So we have had people come in from Cedar Rapids and Iowa City. Des Moines will come over and help us. Mason City has helped us out.”

Marshalltown is part of the Salvation Army Western Division and Kasten says she also got a lot of help from the headquarters in Omaha. Kasten says it was important to respond quickly to help residents as the storm ripped out hundreds of power poles. Kasten says with 10,000 people without electricity, food was spoiling, people who couldn’t take the heat didn’t have air conditioning. She says they are now about one-thousand customers away from getting all the power back on. “And so I think once we get electricity we will be well on our way to getting back to a new normal.”

They are still waiting for the electricity to come back on in their building and they can get back in there to continue the recovery work. “There’s quite a bit of damage that can be fixed. We need a whole new roof and some walls need to be replaced and some ceiling tiles,” Kasten explains. “But we’ll just move from one side of the building to another during the clean up and fixing phase so that we are open and have service to the community.”

It was not only a new job for Kasten but also her first big test with a major disaster. “I had responded to small fires and fed firemen and provided hot drinks or cold drinks depending on the season — but this is my very first time of doing a disaster of this nature. So, I guess you respond by being put in the fire, so that’s what I am doing,” Kasten says.

Getting all the power back on is only part of the recovery — as Kasten says they will also continue working on the emotional issues brought on by the storm. “It’s difficult. Even me, I said if I never hear those sirens again it won’t be too soon,” Kasten says. “But we do have the mental health community on at the MARC center, which is the multi agency recovery center. And so they are there to help with those processes and just to talk people through those things and to listen.”

You can help by donating at: donate.salarmywestern.org/iowatornadoes

The National Weather Service says the tornado that went through Marshalltown was an EF-3, with winds up to 144 miles-an-hour.