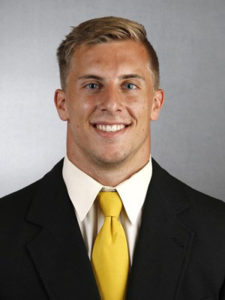 The University of Iowa released news today on the status of two football players.

Head coach Kirk Ferentz announced that fifth-year senior Brandon Snyder will leave the team to look for more playing time with another team. Snyder is a free safety who walked-on from West Lyon High School. He played off and on as he battled injuries in his time as a Hawkeye. He will be a graduate transfer and can play right away.

Ferentz also announced that sophomore offensive tackle Tristan Wirfs will serve a one-game suspension for his arrest Sunday for driving under the influence. The coach says in a statement that his “philosophy and practice is consistent, and that is to hold players accountable – – no matter their position on the depth chart.”