You are here: Home / News / Cooler temperatures to end with increased risk of severe weather 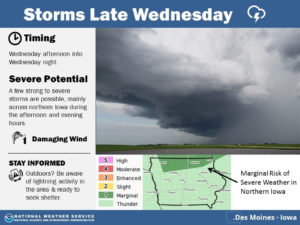 A long stretch of cooler than normal weather for this time of year will soon be coming to an end across Iowa.

National Weather Service Meteorologist Brad Small says the warm-up coming this weekend will be preceded by a chance of damaging storms over portions of northern Iowa.

“That would be during the peak heating hours of Wednesday afternoon and into the evening hours. The main threat would be damaging winds with those storms,” Small says. Wednesday’s severe weather risk area includes the cities of Spencer, Algona, Mason City, and Decorah.

Small says noticeably warmer weather will return on Friday, but it won’t match the “extreme heat” we experienced earlier this summer.

“But, it will be temperatures and humidity levels much more typical for early August, with highs in the uppers 80s to low 90s common across Iowa,” Small says. The warm and humid conditions will stretch into early next week, according to Small, and some thunderstorm chances are also in the weekend forecast.