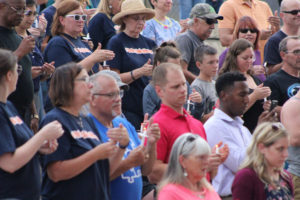 A candlelight vigil focused on unsolved cases involving young people in Iowa was attended by more than 200 people Wednesday night in downtown Waterloo.

Collum is from Brooklyn, also the hometown of the 20-year-old Tibbetts, who was in Brooklyn when she disappeared on July 18. Since then, hundreds of volunteers and dozens of local, state and federal investigators have been trying to figure out what happened to the young woman. Collum used the words “unreal” and “amazing” to describe the support for her family in the town of Brooklyn.

“Not only my community, but the entire state of Iowa…he way that this state has come together to help share Mollie’s story, makes me so incredibly proud to come from a state where you care about your neighbor,” Collum said. Wednesday’s event was organized by the Family and Children’s Council of Black Hawk County.

Also attending the vigil were family and friends of Jake Wilson, the autistic 16-year-old from La Porte City who went for a walk on April 7th and never returned home; 14-year-old Kaiden Estling of Maynard, who was struck and killed by a hit-and-run driver while riding his moped in Fayette County on June 28th; and Elizabeth Collins and Lyric Cook-Morrissey, the young cousins taken by someone in Evansdale on July 13, 2012, and were later found murdered. The case remains unsolved. Drew Collins, Elizabeth’s father, presented a $9,000 check from a July fund-raiser to the local Cedar Valley Crime Stoppers program.