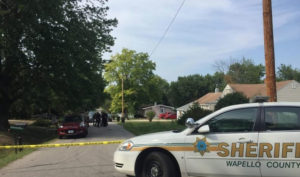 Two Ottumwa men have been charged with attempted murder and burglary following a deadly shoot out with police.

Investigators says the three men forced their way into an Ottumwa home, took some items and then got into a gunfight with police near an elementary school as they tried to get away. Bibby was hit during the shoot out and was taken to the hospital for treatment. One person in the home, who has not been identified, was shot and is recovering.

No police officers were injured in the shooting.