You are here: Home / News / Heavy thunderstorms take down trees in several areas of Iowa 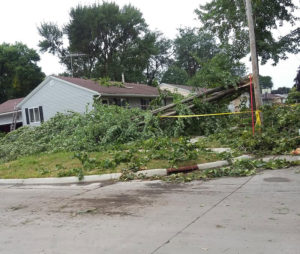 Severe thunderstorms rolled over parts of northern and central Iowa on Sunday, bringing much-needed rain to some areas and strong winds.

“Trees were going down and blocking the street and across the street, trees came down on top of houses,” Ewing says. “There’s quite a bit of wind damage throughout the whole town and we lost power.” Webster City Mayor John Hawkins toured some of the damaged areas of the community on Sunday.

“There’s a few hundred trees torn about or down around the town. There’s still a few leaning against houses,” Mayor 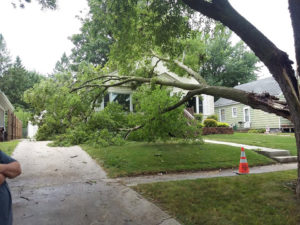 Hawkins says. “A few people got their cars out from under some. Quite a bit of damage in the center of town.”

The Sheldon area also was hit. A severe thunderstorm that rumbled through the northwest Iowa town early Sunday morning left a path of heavy rain, hail, downed power lines and numerous fallen trees in its wake.

In Sheldon, the 80-mile-per-hour wind gusts clocked with the storm uprooted or broke off several large trees, including one that dropped off onto a minivan which was parked on a residential Sheldon street. Although there was extensive tree and property damage in the area, there are no reports of any injuries directly related to the storm.

A van crushed by a tree in Sheldon.