You are here: Home / Fires/Accidents/Disasters / Hinton man to receive millions in bus accident settlement with in Sioux City 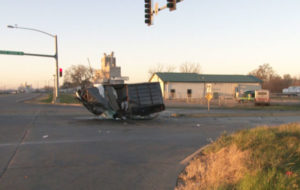 Wreckage from the accident.

The Sioux City City Council has approved a $7.5 million dollar settlement with a rural Hinton man who was critically injured in a crash involving a city bus.

Chad Plante suffered two broken legs and a brain injury in the November 15, 2016 crash at the intersection of Highway 75 and Outer Belt Drive in Sioux City. The Sioux City Transit bus failed to yield at the intersection and collided with Plante’s vehicle. The bus driver was cited for failure to obey a traffic control device. Under the negotiated settlement, the city will pay nearly $211,000 to Plante and his wife Rosanne.

The city’s insurance carrier will cover the remaining amount of nearly $7.3 million dollars. The city has already paid the couple nearly $180,000 for out of pocket expenses, health insurance, and other expenses through June of this year.