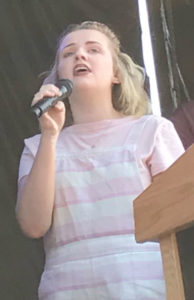 State Fair officials announced Maddie Poppe of Clarksville will perform on the same State Fair Grandstand stage the first evening of next year’s fair, August 8. A year ago, Poppe was playing at farmers’ markets and coffee shops, wondering if she’d ever get a break.

“There were so many times when I kind of wanted to give up, honestly, because I didn’t know if it was going to work out for me,” Poppe said this morning during a question-and-answer session with Iowa’s governor. “…Little did I know that I was just one, “Yes,” away from my whole life changing.”

Poppe’s concert next year — on the state fair’s largest stage — won’t be her first time singing at the fair. She and her sister competed in the Iowa State Fair’s Bill Riley Talent Search 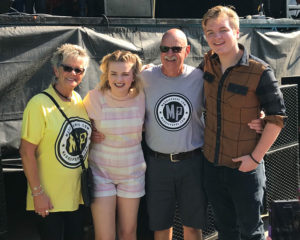 Maddie Poppie poses for a picture along with her boyfried Caleb Lee Hutchinson.

After living in Los Angeles for five months, Poppe is now on an American Idol concert tour. Poppe told the state fair crowd she misses home.

“I guess you don’t really realize what you have until you’re away from it,” Poppe said. “…You know, you don’t drive by in your car and wave to everybody. That’s what we do here, you know?”

Poppe signed autographs and posed for pictures after the opening ceremony. Her boyfriend and fellow American Idol contestant Caleb Lee Hutchinson joined her for the events at the fair.