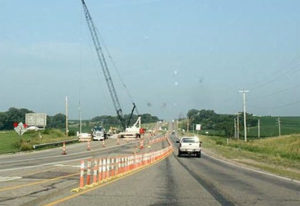 Work is winding down on the expansion of Highway 20 in northwest Iowa.

After years of waiting, the date has been set for the dedication of the completion of the final segment of the expansion of Highway 20 to four lanes in northwest Iowa.

The DOT’s Dakin Schultz says the Highway 20 Association has set a ribbon cutting for October 19th at three p.m. in Holstein at the new Boulders Inn & Suites hotel on the south side of U.S. 20 and U.S. 59.

Schultz says there are some final pieces being completed along the highway. “We’ve got the work between Correctionville and Holstein that we’ll be looking at completion on that. All the paving, mainline paving is complete out there. The contractors are working on shoulders and will continue to do grading work,” According toe Schultz. “From Holstein over to Early, all the pavement is down.” Crews are doing other finishing work east of Moville.

He says they are doing clean up work, putting up signs and doing work on side roads that has to be completed to connect gravel roads. Schultz says they expect to have that section open before October. The completion of the final segment will end the work that has gone on for several years to expand Highway 20 to four lanes from Dubuque to Sioux City.

More information on the completion celebration will be released as the event gets closer.