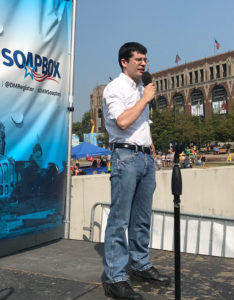 The Libertarian candidate for governor says it’s unlikely he will win, but with nearly three dozen other LIbertarians running in Iowa in 2018, this election hopefully will be a party-building exercise. There are about 11,000 Iowans who are registered Libertarian voters today and Jake Porter hopes to push that past 20,000 by November.

Porter spoke this morning on The Des Moines Register’s Soapbox at the Iowa State Fair. Porter used a barnyard term to describe the 2018 campaign conversations among Democrats and Republicans.

“You know there’s a lot of attacks right now, political attacks, partisan BS that happens,” Porter said. “…I hope that everyone around here that works at The Register has pretty tall boots, because a lot of BS being spoke, I’m sure.”

Porter singled out Governor Kim Reynolds and her fellow Republicans for charactering her Democratic opponent, Fred Hubbell, as “Fancy Fred” because he’s wealthy.

“I wish I had Fred Hubbell’s money, I’ll be honest, but we’re not going to attack him for having money…I’m going to say something nice about both of them,” Porter said. “Governor Reynolds is someone that turned her life around, I think an inspiration to a lot of Iowans. Fred Hubbell successfully ran businesses…We can say nice things about our opponents. We can be ‘Iowa Nice’ and we can still disagree on the solutions for Iowa.”

“These things are the important things that need to be addressed, that we need to talk about and we’re not going to do it by attacking each other, calling each other names,” Porter said. “…A different message, a different way.”

Porter is a business consultant from Council Bluffs. He vows to evaluate every state agency, with the goal of consolidating, eliminating and making activities in state government more efficient.