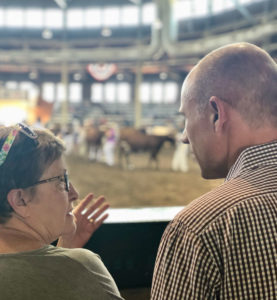 Democratic candidates weighing their prospects for the 2020 presidential race were in Iowa this weekend.

“What I fear for this Democratic Party that I love so much is that we have a tendency to bring nail clippers to a gun fight,” Avenatti said, drawing laughter and applause from the crowd. “…I believe that our party, the Democratic Party, must be a party that fights fire with fire.”

On Saturday, New York businessman Andrew Yang visited the State Fair. Yang, who announced early this year that he was running for president, argues there will be a massive loss of jobs as the economy evolves, so the government must take steps to ensure a basic income for every American between the ages of 18 and 64.

“Which now a friend is asking me to call ‘The Tech Check,'” Yang said, in an interview with Radio Iowa as he explained the concept, “which is that every American adult, every adult in Iowa receives $1000 a month free and clear, paid by the companies that benefit the most from automation, so that people can make plans for the future with a degree of security.” 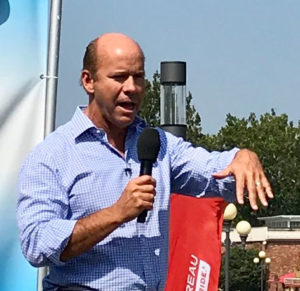 On Sunday, Maryland Congressman John Delaney crossed a milestone when he visited his 99th county in Iowa. Delaney, who announced he was running for president about a year ago, also toured the Iowa State Fair and delivered a campaign-style speech at The Des Moines Register’s Soapbox.

“If you want a government that will actually represent you and bring us together, then I encourage you to get on board with us,” Delaney said to conclude his remarks. “…That’s why going to 99 counties in Iowa. That’s why we’re out early because I’m a different kind of Democrat and I have a different kind of message.”

California Congressman Eric Swalwell, a native of Sac City, has visited the state seven times since early 2017. During a speech Saturday on The Des Moines Register’s Soapbox at the State Fair, Swalwell suggested the 2018 election is setting the stage for 2020. 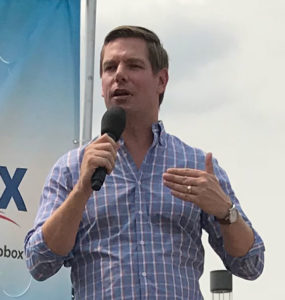 “We’ve got about 80-some odd days to go until we start to see change in Iowa and change in America and, along the way, we must keep resisting,” Swalwell said. “It’s your resisting that is working.”

A few other potential presidential candidates of the future are due in Iowa this week. California billionaire Tom Steyer, Montana Governor Steve Bullock and former San Antonio Mayor Julian Castro are all Democrats. Vice President Mike Pence is also slated to speak at an event in Des Moines on Wednesday.