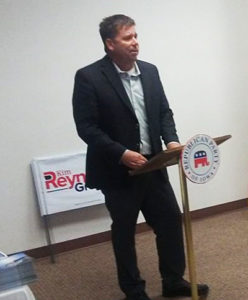 Rick Bertrand retired in April after finishing his second term in the Iowa Senate — but was nominated Tuesday evening by Sioux City Republicans to run again for the District 7 Senate seat. Bertrand was nominated by Steve Stokes, the former GOP candidate who dropped out of the race earlier this month for family and business reasons.

Bertrand says he decided to run again after several Republicans, including Governor Reynolds and Senate Majority Leader Jack Whitver, started asking him to reconsider his retirement. “When you’re asked it’s a good feeling,” Bertrand says, “and the community asked. And when your governor asks and when the party asks, it’s a good place. It’s a good thing for Sioux City. And I think this is a win-win for Sioux City when we win this.”

Bertrand says if he is re-elected, he will continue to be a champion for Sioux City. “That’s probably the thing that excites me the most — not just going back, that you are wanted and the community supports you — but you are going to walk back with a nice bag of capital and that means leverage, and that is power,” according to Bertrand. “And there are some things that we need to get done around here. With Highway 20 getting completed, we are going to have some infrastructure opportunities.” 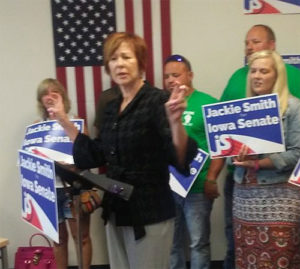 Former Woodbury County Supervisor Jackie Smith is the Democratic candidate for the senate seat. Smith spoke out about Betrand’s announcement at the Woodbury County Democratic Headquarters before a crowd of supporters She says Bertrand is going back on a promise he made. “His claim to fame is term limits. He had a farewell speech on April 17th — I encourage everyone to look at that — it’s on Youtube. It’s on the Senate Floor. And he actually talks about term limits and that it is time for him to go. I couldn’t agree more,” Smith says.

Smith served on the Woodbury County Board of Supervisors for eight years and is making her first run for state office. She disputes Bertrand’s claim that he will bring political capital for Siouxland to the state senate and says by reentering the senate race he is breaking a promise. Smith says she had a 96 percent attendance record on the county board, and says Bertrand missed more votes and meetings than any other state senator the past four years.

“Now wouldn’t we be fired if we didn’t show up for our jobs?,” Smith asks. “I think voters should fire him and keep him home and not in Des Moines.”

She went on to say she supports the right for Iowans to collectively bargain with their employers for wages, benefits and basic working conditions. Smith also says she will work to increase funding for education, mental health and medicaid programs if she is elected.

(This story was updated at 3:15 to add Smith’s response)