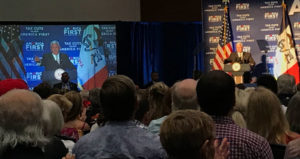 Vice President Mike Pence at an appearance in Des Moines.

Vice President Mike Pence today said there is “progress and energy” in the U.S. economy, including “better” trade deals with countries like Vietnam and Argentina. During a speech in Des Moines, though, Pence sought to allay trade war concerns in farm country.

“I’ll promise you we will never stop fighting until American farmers win like never before,” Pence said.

Pence spoke at an event sponsored by “America First Policies.” The group was created in early 2017 to promote President Trump’s agenda. Pence ran through a litany of Trump Administration actions, including “rolling back red tape,” appointing U.S. Supreme Court justices and negotiating the return of Korean War soldiers’ remains before turning to trade. Pence told the crowd the Trump Administration is fighting for a “level playing field.”

“We’ve confronted countries that frankly for too long have taken advantage of America on trade,” Pence said, “and we’ve unprecedented progress on trade deals that are free, fair and reciprocal, that put American workers and American families first.”

Pence specifically mentioned bilateral deals with Vietnam which has agreed to buy U.S. corn and wheat and for American pork sales to Argentina. 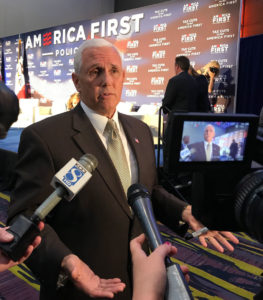 “We’re working with Canada and Mexico on a re-negotiated North American Free Trade Agreement. We we’re making real progress, Iowa, I’m here to tell you,” Pence said. “We’re actually in negotiations already with Japan about a new and better trade relationship and the European Union was in just a few days ago to start the same conversation.”

Screens flanking the stage periodically flashed the message that “tax cuts to put America first” as a crowd of about 300 waited for Pence to arrive.

After his speech, Pence spoke briefly with reporters. Pence said NAFTA negotiations are “very close” to reaching a conclusion.

“As the president’s said many times, as I said today, this president, this administration are going to continue fighting for American workers and American farmers 100 percent,” Pence said.

“There’s no quetion that Congressman Young’s district and that election may be one of the elections that decides control of congress,” Pence told reporters. “And for Americans who like what we’ve been able to do…we need Congressman David Young back in Washington, D.C. to continue that agenda.”

The Iowa Democratic Party held a news conference about two hours before Pence’s public appearance in Des Moines. They accused the Trump Administration of sacrificing farmers’ finances to a trade war that “is about to destroy our state.”