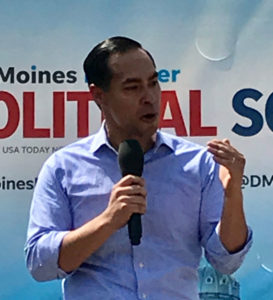 Former San Antonio Mayor and possible 2020 presidential candidate Julian Castro today said it’s time for a “blueprint for the future” rather than the “backward” path he says GOP leaders in Washington, D.C. are pursuing.

“I believe that the goal of this country should be to become the strongest, the smartest and the safest country in the world,” Castro said. “…As we become smarter, we become stronger. As we develop our alliances around the world, instead of tearing them down, we become safer.”

Castro spoke on The Des Moines Register’s Political Soapbox at the Iowa State Fair early this afternoon. Castro is a former Obama Administration official who is making it clear he’s considering a run for president in 2020.

“I’m going to make a decision after November and before the end of the year and based on that, if I decide to run, then I’ll make an announcement shortly after,” Castro told reporters. “…I believe that the 2020 race is wide open. I’m convinced that people want a new generation of leadership.”

During his speech to fairgoers, the 43-year-old laid out policy goals, including some form of “Medicare for All,” universal preschool, at least two free years of college and criminal justice reform.

“Because everybody counts in this country,” Castro said, to applause. “We can’t waste anyone.”

Castro served as U.S. Secretary of Housing and Urban Development in the Obama Administration. Castro Castro’s twin brother is a Democratic congressman representing the San Antonio area in the U.S. House.