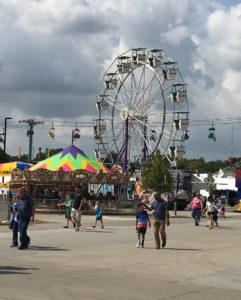 The Iowa State Fair broke its attendance record with a big final weekend.

The Iowa State Fair’s 11-day run ended Sunday. State Fair officials say attendance had been lagging just slightly behind 2017 numbers through Friday, but a strong weekend boosted the 2018 Fair’s total attendance past the record set in 2017 — by just 189 people. More than 1.1 million people visited the Fair this year.

The previous record attendance at a Grandstand concert was 10,643, which was considered a sell out before Grandstand renovations this year opened up 4,000 additional seats.