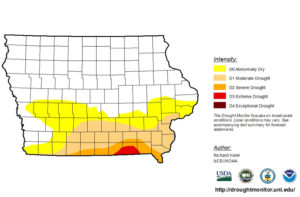 The U.S. Secretary of Agriculture has designed two more southern Iowa counties as disaster areas, due to drought conditions.

Farmers in those counties may be eligible for emergency loans from the USDA’s Farm Service Agency. The loans may be used to reorganize or refinance debts or even to acquire livestock to replace animals sold off during the drought. Loan applications under this latest disaster declaration for Van Buren and Appanoose Counties are due by April 8th of next year.