You are here: Home / News / Governor Reynolds wants another tax cut if she wins in November 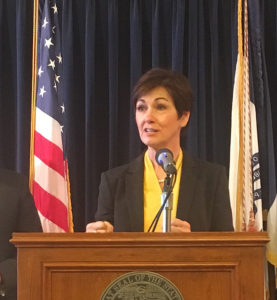 Republican Governor Kim Reynolds says she hopes to cut taxes again if she is elected to a full, four-year term this November.

“We’re working on that right now,” Reynolds says. “We haven’t sat down. I haven’t laid anything out.” Reynolds took over as governor in late May of 2017, so the 2018 legislative session was her first as governor. Reynolds approved a plan to cut taxes by $2 billion over the next six years. The package imposed new sales taxes on digital goods and services, but also reduced state income taxes on individuals. The plan calls for reducing taxes for corporations in future years.

“This isn’t a one and done,” Reynolds says. “We’re going to continue to look for opportunities to make Iowa more competitive.” The governor says a primary target for future action should be greater reductions in Iowa’s income tax on corporations.

“We’re the highest in the country,” Reynolds says. “Remember we said we were going to do a comprehensive review of our tax credits and then we’ll bring the two together and look for opportunities to maybe realign some of those.” Reducing the amount of state tax credits that are awarded would then give policymakers room to reduce corporate taxes, according to Reynolds.

Democrats in the legislature have said the tax cuts Reynolds already approved will create state budget deficits. Jeff Holmes is a spokesman for Fred Hubbell, the Democratic Party’s nominee for governor. He says Reynolds is showing that her “fiscal irresponsibility and mismanagement seem to have no end” as she ponders more tax cuts. Hubbell has proposed limiting or reducing a series of state tax credits and boosting state spending on schools and the health care system.