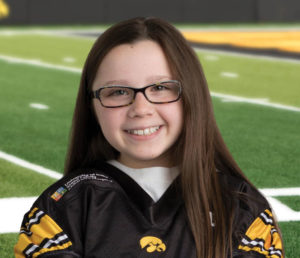 A 10-year-old girl from West Burlington with an extremely rare autoimmune disease will be on the sidelines with the Iowa Hawkeye football team for this Saturday’s season-opener against Northern Illinois.

Gwen White is the “Kid Captain” for the game at Kinnick Stadium. Her mother, Kerstin Quattromini, says Gwen was diagnosed with juvenile dermatomyositis just under two years ago.

“Juvenile dermatomyositis is a disease that attacks the skin and the muscles. There is no cure,” Quattromini said. Gwen’s mother and her father, Tom White, are featured in a video produced by U-I Stead Family Children’s Hospital.

“It was scary because I’ve never heard of it,” Tom said of the disease. “Three kids out of a million get this, so no one’s ever heard of this.” Gwen underwent a year of physical therapy to regain muscle strength and function. She takes 13 pills each day and visits the hospital monthly for 8 hours of steroid and other infusions. Gwen’s disease is currently not active and she’s in medical remission, but the sun can activate her disease, so she wears sunscreen daily.

When I go to school…I have to put on sunscreen at my locker,” Gwen said. “But, it’s really nice because all of my teachers and friends understand. So, it’s pretty cool to have friends like that.” This marks the 10th year for the UI Kid Captain program.