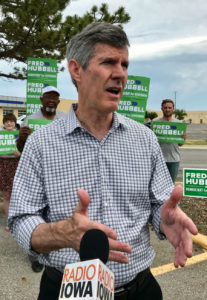 Fred Hubbell, the Democratic candidate for governor, and his wife Charlotte paid about $650,000 in state and federal taxes for the 2017 tax year.

The Hubbells reported $3 million in adjusted gross income, including the roughly half a million dollars Fred Hubbell was paid for serving as a director on corporate boards last year. The Hubbell campaign let reporters review the top, summary pages of the couple’s 2017 state and federal tax returns today, but not the full returns which could show the sources of the Hubbell’s income.

Earlier this summer, Governor Kim Reynolds posted her full returns for the past 10 years on line and she’s challenged Hubbell to do the same. “What’s he got to hide?” Reynolds asked this morning during a question-and-answer session with reporters in Ames. “I think Iowans deserve to see that.”

Jeff Link, a consultant to the Hubbell campaign, accused Reynolds of suggesting a “double standard” for Hubbell that the Republican president has failed to follow.

“We felt this was an appropriate step,” Link told reporters this afternoon. “Donald Trump has refused to do anything.”

“I don’t know that that’s as important as disclosing how much income you have, how much tax you paid and how much of your income you give to charity,” Link said.

The Hubbell’s donated 27 percent of their income to charitable causes last year.

Governor Reynolds sent out a fundraising email this afternoon, accusing Hubbell of trying “to avoid talking about his finances.”

“I released for 10 (years) and I think he should do more,” Reynolds told reporters earlier today. “…I think you can’t just talk about transparency.”

Hubbell’s campaign indicated Hubbell has made the same kind of personal financial disclosure former Republican Governor Robert Ray did in 1968 and former Democratic Governor Chet Culver did in 2006.