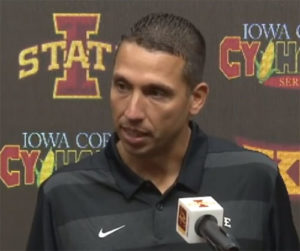 Iowa State football coach Matt Campbell says having the season opener canceled by weather just a few minutes into the game was not the ideal situation — be he thinks it wasn’t a total loss.

The game was stopped by lightening 4:05 in with the Cyclones leading 7-0, and then eventually canceled. Campbell isn’t sure if the cancellation will hurt any one area of the team more that another as they prepare this week for in-state rival Iowa.

“As a coach and as a player you want to play, you know, and so I just think our entire team in a lot of ways, getting out there, getting to play the game of football, getting to play under the lights, having successes, having and failures and getting to work through that — that’s probably affected the team in general.” He says those adjustments in the game are the things teams want to do because that’s what defines them.

Campbell was asked about the canceled game will serving as a whole game for the players who were suspended for the season opener. “There’s a lot of other things that go into it other than just the game aspect of it. I really personally think those are so minimal,” Campbell says. “It’s when you don’t get to practice with the team for the last month. Or you are on the scout team for the last three weeks, or you’ve had to get up in front of your teammates and apologize.” He says being part of the team is more than playing the games. “I think the lead up of two, three weeks where they are not even getting to engage in game-like activities, I think that’s hard,” according to Campbell. “So, I think that it’d be naive to say it’s just an entire game situation that’s right or wrong — especially in certain situations.”

Any stats from the canceled game do not count and Iowa State travels to Iowa City for Saturday’s game with a 0-0 record.