You are here: Home / News / Hawkeye legend Nile Kinnick featured in new book on 100th anniversary of his birth 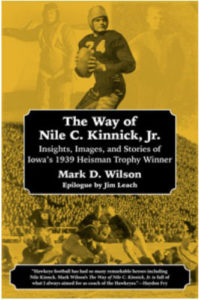 A new book chronicles the short life and hundreds of quotes from the University of Iowa’s most famous football player whose 16-foot-tall statue stands in front of the stadium named in his honor.

“My whole goal was to preserve his legacy,” Wilson says. “There’s new generations coming on every single year, new freshmen. I’ve met little children coming in for the first time. Dad or Mom might say, ‘Well, we’re here at Kinnick Stadium,’ and they’re obviously going to ask, ‘Who was Kinnick?'”

Wilson’s book is called, “The Way of Nile C. Kinnick, Jr.: Insights, Images, and Stories of Iowa’s 1939 Heisman Trophy Winner.” There are a total of 366 Kinnick quotes in the book, one for every day of a leap year, along with dozens of photos and stories. Wilson says Kinnick has been a personal inspiration in his own life and he hopes the book inspires others — as he finds the quotes are still useful decades later.

“They are covering about every topic you can think of: government, war, poverty, race, religion,” Wilson says, “some of the things he thought about, his faith, education, football.” Kinnick was an honors student and a superior athlete, Wilson says. The 5-foot-8, 170-pound Adel native broke 14 Iowa records his senior year. The quotes draw both from Kinnick’s time as a student and while he was in the military.

Navy Ensign Kinnick died at age 24 during World War II when his fighter plane crashed during a training flight in 1943. Kinnick’s grandfather was George Washington Clarke, who served two terms as Iowa’s governor. Many of Kinnick’s family members were involved in politics and Wilson is convinced had Kinnick lived, he would have eventually run for president.

Wilson, a first-time author, is a retired Iowa City teacher and is an ambassador for the U-I Athletics Hall of Fame. “All of my royalties on every book sold will go back to the six Nile Kinnick scholarships,” Wilson says. “There’s one for leadership, four that are memorial scholarships, and one for women. It’s my giveback. I was an elementary teacher and didn’t have a lot of money to give but I can sure give back the royalties from this book.”

The book is being printed by Ice Cube Press, based in North Liberty. It’s available at Amazon, Barnes and Noble, the Hawkeye shops, and at icecubepress.com.