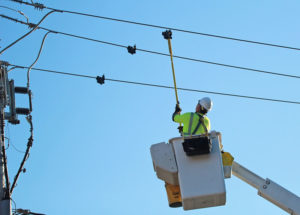 MidAmerican Energy will get instant reports of power outages from new electronic sensors being attached to Iowa power lines.

“It enables us to send crews faster to respond to the outage and it also helps us with the reliability of our system,” Geoff Greenwood, a spokesman for the company, said.

Greenwood said it can take hours for utility workers to physically inspect lines and find the source of an outage. The electronic sensors transmit information about power outages to a control center located in Des Moines that monitors all of MidAmerican’s power grid in Iowa.

“We tried them out as an experiment, initially, and the experiment worked out really well, so we’re deploying 150 of these right now, through October,” Greenwood said. “We’ve already got 200 and these are across the state.”

The sensors are called “remote fault indicators.” The devices are able to identify faults in the flow of electricity.

“It tells you, from Point A to Point B, that there’s been a interruption between those two points,” Greenwood said.

Sensors have already been installed in rural areas and in Council Bluffs, Des Moines, Fort Dodge, Iowa City, Sioux City, the Quad Cities and Waterloo. The devices can be attached to lines that are above or below ground.

“We have largely deployed these on above-ground lines,” Greenwood said, “because those can be particularly difficult for us to observe when it’s dark and when it’s stormy and when we have blizzards.”