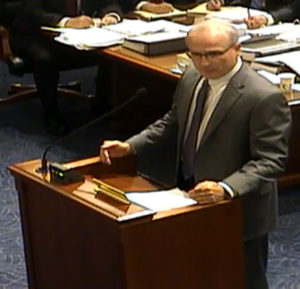 The Iowa Supreme Court heard oral arguments today in a lawsuit by landowners against the Iowa Utilities Board for allowing the use of eminent domain to acquire land for the Dakota Access oil pipeline.

Attorney Bill Hannigan argued for the landowners. “The question in this case is whether a private crude oil pipeline — which provides no direct service to Iowans what so ever and provides only incidental benefits — under this state’s constitution,” Hannigan says. The justices asked Hannigan if the pipeline didn’t provide some benefit to the state because Iowans use petroleum products. He says the taking of the land benefits the pipeline company and not Iowans.

He says they believe if the state is going to own the property after the land is condemned, then that is an Iowa public use of the land. Hannigan says the pipeline also provides no direct benefit to Iowans.

“The state has not oil wells, it has no oil refineries. This pipeline has no on ramps it has no off ramps in this state,” Hannigan says, ” and then as it crosses the state then, providing no service, that is the test. Iowans have no direct use.” Justice Thomas Waterman asked Hannigan about the benefits of using the pipeline instead of rail cars to transport the oil.

“Isn’t the fact Iowans are safer with the pipeline versus these rail cars a factor that supports public use or public benefit for our state?,” Waterman asked. He cited the rail accident in Canada that destroyed a town. Hannigan says changes are being made in rail cars to make them safer. Justice Edward Mansfield questioned Hannigan about the impact the ruling could have on transporting other materials in the state.

“You would concede it’s a public use if we had an oil refinery in Iowa right?,” Mansfield asked. “I think if this pipe went to an Iowa oil refinery, then we’d have to think that was a public use,” Hannigan says. “What concerns me is that we are one nation. And doesn’t this approach that you are advocating for result in discrimination against interstate commerce and would present problems under the Dorman commerce clause?,” Mansfield replied. 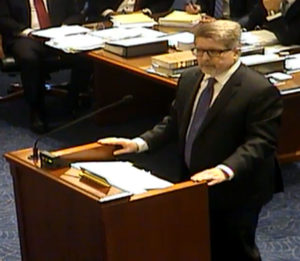 Attorney Brent Dublinske represented Dakota Access and says the pipeline has been in operating safely and efficiently for 15 months. “The Dakota Access Pipeline is now an established fact. And this case is largely, if not entirely a moot one,” Dublinske says. He says the IUB followed the law as it is set out.

“It provides a detailed list of what information an applicant for an interstate oil pipeline must provide to the expert board. It provides for extensive notice and opportunity to object and be heard,” Dublinske says. “And it requires the board based on that information to determine whether that interstate pipeline will quote: promote the public convenience and necessity.”

Justice Brent Appel questioned whether the indirect benefits of the pipeline were enough to justify the taking of someone’s land. “You might as well just say your right to property is not a Constitutional right but is subject to legislative dictate,” Appel says. “Respectfully your honor, that is not our position. We do believe that there are limits on the power,” Dublinske replied.

Dublinske says all the attention the Bakken Pipeline has received shouldn’t overshadow the issues. “Oil pipelines are considered critical infrastructure. That alone suggests that there is a public use. Dakota Access may be a high profile case, but under this court’s precedents… under the clear mandate of the legislature, legally this case is not difficult. The appellants cannot meet the high burden, the high bar to overturn the board and the use of eminent doman in this case,” according to Dublinske.

The Supreme Court will release its ruling at a later date.