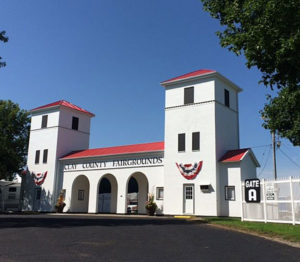 One of Iowa’s top annual tourist attractions came to an end Sunday. Clay County Fair Manager Jeremy Parsons says the highlight of the nine-day run of the fair was the weather.

“I don’t know if the Clay County Fair has ever gone nine consecutive days without rain,” Parsons said. “The weather really seems to set the tone and the mood.” This was the 101st Clay County Fair. Many improvements were made to the fairgrounds in Spencer after the centennial year in 2017 and, according to Parsons, fairgoers are happy with the changes.

“Grandpa’s Barn, the new asphalt on food row, the city trail, the new centennial plaza, the Northwest Bank Stage…I mean, all of these major improvements we made to the grounds have been really well received by our fairgoers,” Parsons said. The Clay County Fair is billed as “the world’s greatest county fair.”

The acts on the fair’s grandstand this year included Lee Brice, Tesla, Oak Ridge Boys, and Sesame Street Live! An estimated attendance figure for the 2018 fair hasn’t been released. More than 335,000 people attended the Clay County Fair in 2017. The 2019 Clay County Fair is scheduled for September 7-15.