You are here: Home / Human Interest / New USS Sioux City warship to be commissioned in November 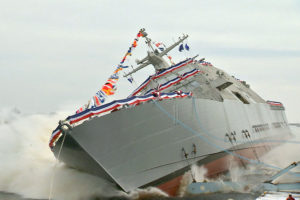 A date is now set for the commissioning of a new warship to be named after a city in northwest Iowa.

The USS Sioux City is named, in part, for the birthplace of Medal of Honor recipient Bud Day. Frank Thorp is the president of the U.S. Navy Memorial and he chairs the commissioning committee for the ship. Thorp calls the commissioning of a combat ship the most patriotic event a person will ever attend.

Thorp says, “Even the toughest, meanest individual will get choked up at the emotion of knowing what those men and women are ready to go do for their country.” The Sioux City, a Freedom-class littoral combat ship, will have a crew of about 100. A second crew will continue to train while the other is at sea. The commissioning ceremony will take place November 17th in Annapolis, Maryland. After that, the ship could deploy any day, if ordered, to battle newer threats like quiet submarines near-shore.

Chris McGowan, with the Siouxland Chamber of Commerce, is also on the commissioning committee. He says it’s a significant event for an area that has a legacy of service. McGowan says, “This is a manifestation and reflection of how strongly people from Sioux City and Siouxland feel about recognizing, supporting and lauding the men and women who volunteer to defend freedom around the world.”

The ship is designed to operate close to shore at 50 miles-per-hour. Most cruisers move at 30 miles-per-hour. The commission is raising money to fund the November ceremony, crew recognitions and future scholarships. So far, they’re about halfway to their goal of $800,000.